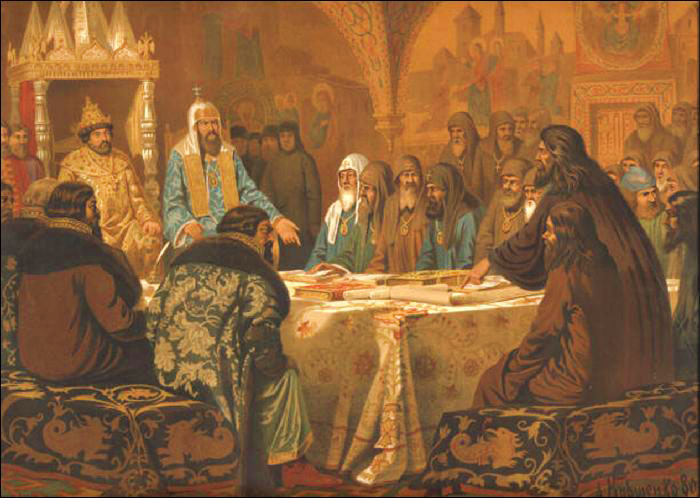 Patriarch Nikon, desiring to change the ancient traditions, began to impose new ritual and liturgical practices onto Russia’s Church, unilaterally. He ascended the patriarchal seat in 1652, but, even before his consecration, he was close to Tsar Alexei Mikhailovich. Together, they decided to remake Russia’s Church along the lines of her contemporary Greek counterpart.

In this undertaking, Nikon relied heavily on one Arseniy, conventionally termed, the Greek — a famous intriguer and a man of questionable faith. He was schooled by the Jesuits, adopted Islam, then became Orthodox, but reverted to Catholicism. When he came to Moscow, he was exiled to the Solovetski Monastery as a dangerous heretic. It was there that Nikon found him. This caused murmur among the Russian populace, but people feared to object to Nikon openly, as the Tsar granted him boundless authority in church affairs.

Relying on the sovereign, Nikon embarked on his ecclesiastical reform resolutely and boldly. Boasting a cruel and obstinate character, he began by consolidating his power, calling himself, “the great sovereign,” as some pope. This title was previously reserved for the Tsar (although it was once used with reference to his grandfather, who happened to be a patriarch). Nikon treated bishops arrogantly, not wanting to call them, brothers. Even V. O. Klyuchevski, the noted historian, called Nikon a dictator.

Ecclesiastical literature was the first target of reform. Russians had always revered booklore and cherished the sacred books. Pious scribes meticulously avoided errors, as did the printers; emendation of texts was conducted with great care and circumspection. Patriarch Nikon acted differently — hastily and carelessly. At the Council of 1654, it was decided to realign the liturgical books to ancient Greek and Slavonic manuscripts, but, in fact, the revisions were made using suspect books recently printed in Venice and elsewhere in the West. Even the Greeks were suspicious of these editions. The most notable changes include:

- the two-finger sign of the cross, received by Russia along with Christianity, as part of the holy apostolic tradition, was replaced with the three-finger sign;

- the name of our Savior, conventionally spelled, Isus, was unaesthetically converted to, Iisus;

- the clockwise procession around the church was reversed;

- the word, True, was deleted from the Creed, with reference to the Life-giving Holy Spirit;

-the double Alleluia was replaced by a triple pronouncement;

- two of the seven prosphorae used in Divine Liturgy were negated;

Thus, transgressing his prerogatives, Nikon defiantly encroached upon the apostolic tradition of the Russian Orthodox Church.