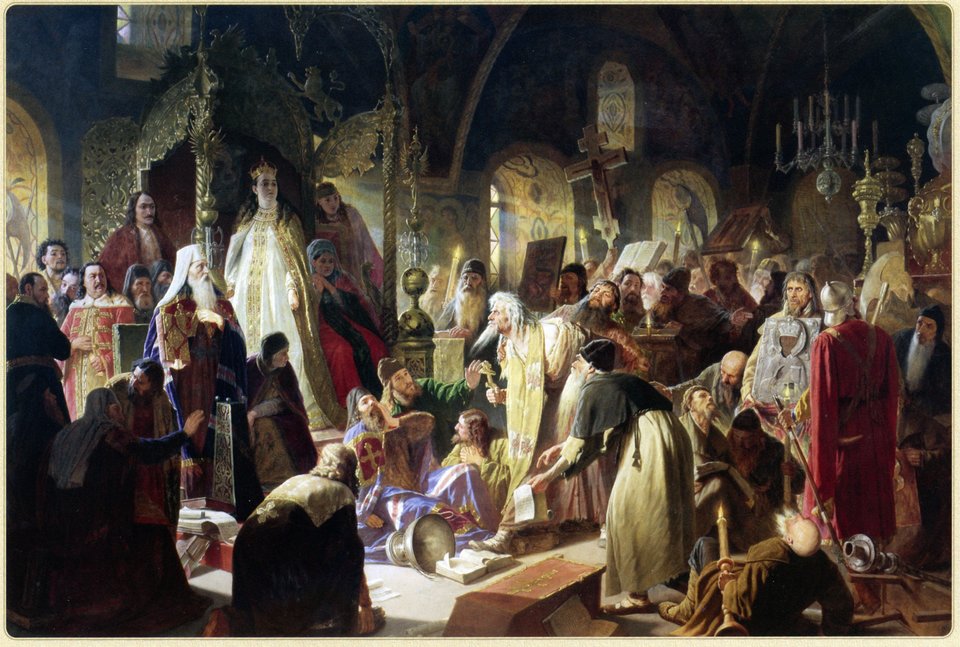 The status of old-believers in 17th century Russia was in many ways similar to that of Christians in the Roman Empire, who were forced to hide in catacombs. Russian Orthodox old-believers, likewise, hid from both state and church authorities. All Russians were required to believe the way the sovereign commanded. On the behest of Patriarch Ioachim, Tsarevna Sophia, in 1685, issued her 12 articles against old-believers, pronouncing:

- If one secretly confesses the old faith, one must be whipped and exiled.

- Those who show mercy to old-believers, providing them with food or water to drink, must be whipped.

- Those who shelter old-believers are to be exiled and whipped.

- All old-believer property is to be confiscated to the Sovereign.

(Even apostasy could not safeguard one from persecution:)

- If an old-believer re-baptizes someone and then repents, confessing to his spiritual father, sincerely wanting to receive Communion, then he, after confessing and communing, must be executed without mercy.

Myriads of Christians were burned, tongues were excoriated, heads were severed, ribs were crushed and people were quartered. Prisons and monastery dungeons were full of sufferers for the Faith of Christ. The clergy and the civil government mercilessly exterminated their own brethren. Even women and children were eradicated. So persecuted Christians fled to deserted places, but therein, too, they were sought out. Their dwellings were ruined, while they were arrested and tortured. Fleeing elaborate torture and having no refuge or harbor some started immolating themselves.

Emperor Peter I was more tolerant. He legally recognized Catholics, Protestants, Muslims and Jews, only old-believers had no freedom in their native country. Under Peter, they were no longer burned en mass, but sporadic burnings were not uncommon. He allowed them to live in towns and villages, but imposed a double tax on them. However, they had no civil rights. Under Peter’s successors, their position changed little.

Only in the reign of Catherine II (1762-1796) did old-believers sigh in relief. Yet under Alexander I and Nicholas I, they were once more persecuted, not only in Russia, but also abroad. Only at the beginning of the twentieth century, after the Manifesto of Toleration published by Nicholas II, did the persecutions stop. From 1905 to 1917 over a thousand churches were built!

But old-believers in Imperial Russia never received full religious freedom; the legality of their priesthood was never recognized; the articles of the criminal law punishing mainstream Christians for joining old-believers (“seduction into schism”) were not abolished; it was forbidden to preach openly. They could not occupy high administrative positions and had not the right to teach in public school.