100 thanks (Active member of the community)
Bows 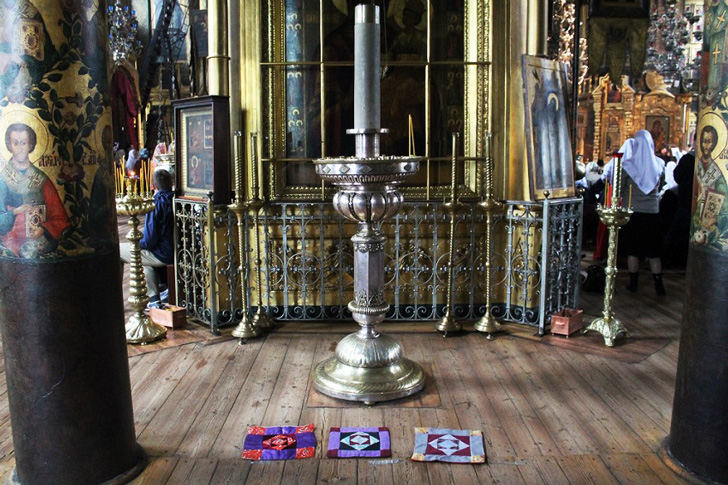 Worship bows are a manifestation of our adoration for God, our Lord, of His Holy Mother and of His saints. Old-believer devotion knows three kinds of bows, as they existed in Russia’s Church before the 17th century schism. You will find a reference to bows in, Son of the Church, a 17th century instruction to neophytes. The first, ordinary bow is a slight inclination of the head to the breast; the second, intermediate bow is made to the waist; the last, or deepest bow is a prostration.

When time comes to execute the latter, you need not bang your head against the flooring, nor should you do thus whilst praying at home; rather you should kneel, placing your head on a special prayer pillow. As for your hands, you need strew them together, placing them courteously onto that cushion, elbows kept nigh. The other bows are, likewise, executed jointly with the other worshipers. We arise together as well. Apart from the prostration described (also called, the great bow) there exists another type of the same, called, the small prostration, or metanie. It is made quickly, without lowering of the head.

Holy Martyr Avvakum wrote to his goddaughter, Boyarinya Morozova: “When making small ground bows, keep your head upright; when the time comes to make a great bow, incline your head to the ground.” P. I. Melnikov-Pechorski, a Russian writer known for his novels about old-believers, explains: Metanie, is a word of Greek origin. This practice come into general use in Russia and is observed today by old-believers. It means a small ground bow… If there is no rug, one may lay one’s hands on one’s shirt or dress tail spread on the floor. (In the Woods, part 1, chapter 11).

The article was translated, with omissions, from rpsc.ru
by Barabanova Lyubov Yuryevna and Alexey Logvinenko for nashavera.com,
but this last paragraph was appended by a translator.