106 thanks (Active member of the community)
Divisions among old-believers 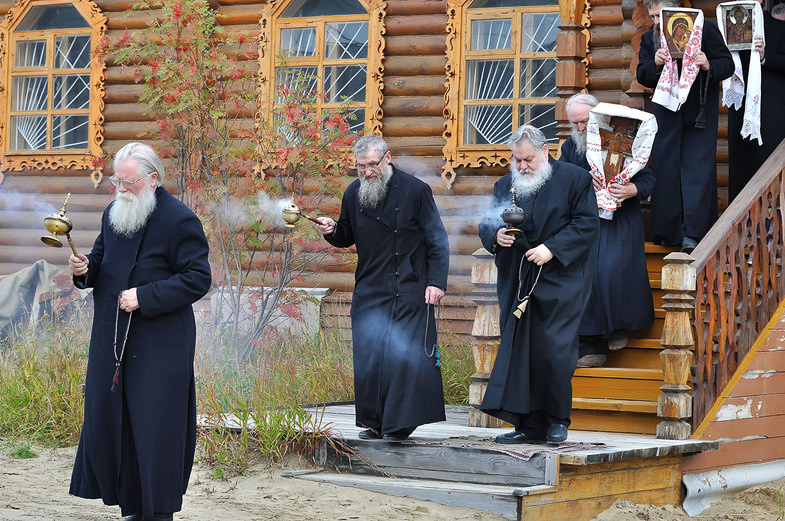 Patriarch Nikon's reform and the subsequent persecutions caused anxiety and unrest among the people. Some Christians began to think that the final times had arrived and that the Day of Doom is nigh. Such notions were reinforced by other circumstances. A year after Nikon published his first “corrected” book, in 1654, an epidemic took place; many towns were deserted. There were none to bury the dead; their corpses decomposed spreading infection and making foul the air. Many villages became completely depopulated; fields remained unsown and famine reigned. Moreover, the winter frosts struck early, tempests blew and hail damaged the fields. All these events threatened the people, who believed the woes to portend the beginning of the Last Judgement of God. Some entered coffins while still quick, awaiting Christ's present advent.

Nevertheless, after Nikon, persecutions of old-rite Christians did not cease and many people continued to believe that the final times are nigh. Among the persecuted, a new view of Antichrist appeared; his advent was to be understood in a spiritual sense — the Antichrist does not exist as a visible being but his kingdom had already dawned. This new lore caused division among old-believers, which division could have been avoided had they the ability to discuss such matters and come to concord. But they had to withdraw to deserted places, living amid destitution, troubles and misfortunes. This is the reason why division was unavoidable.

Along with this new doctrine regarding Antichrist, a new teaching concerning the priesthood appeared. Some old-believers started teaching that the priesthood had ceased to exist and had perished irrevocably. There aren’t any true priests left, they said, while the conforming ones are servants of Antichrist. For this reason, a new movement was born among old-believers, later to be called, ‘bezpopovstvo’ (priestlessness).

Bezpopovstvo as a distinct movement among old-believers was established by the beginning of the 18th century, after the death of those priests who were ordained before the schism. The old-believers who rejected the newly-ordained priests, were called, ‘bezpopovtsi,’ because they had no priests at all. Deciding that it is not only impossible to accept the priests but also to recognize the baptism of Nikon's followers, they re-baptized those who joined them of the new-rite church. Likewise, having no priests, these old-believers had no means to administer the other sacraments — the holy Eucharist, chrismation, marriage et al. Their laymen administered baptism and confession, in addition to conducting divine service, excepting the Liturgy. With time, a distinct order of tutors or ‘nastavniki’ emerged. These were laymen elected to conduct services and resolve spiritual issues.

The problem of marriage divided the bezpopovtsi. Initially, all firmly believed that this sacrament could not exist among them, for only priests may administer it. But, as no priests remain, proper marriage is impossible and all Christians need be celibate, they reasoned.

A bezpopovskiy council took place in 1694, in Novgorod. Therein, marriage was rejected outright — this is the reason why the adherents to this council were called ‘bezbrachniki’ (celibates). Many are also termed, fedoseevtsi, with respect to one of their outspoken advocates, Theodosiy Vasiliev. The fedoseevtsi founded in Moscow the famous Preobrazhenskoe cemetery complex, which is coeval to that of Rogozhskoe.

There are other branches of celibate bezpopovtsi, which sects had all but disappeared by the 21st century. (The adherents to the most numerous of these are conventionally termed, philippovtsi.) However, absolute celibacy could not take root among the bezpopovtsi, for it can only exist in monasteries, among ascetics. Those left in the world started to fornicate, yet some bezpopovtsi reasoned that betrothal is not reserved to the sacrament and that laymen could administer it. These bezpopovtsi are called, ‘brachnie.’ In their communities, the nastavniki can administer trothplight. Today, the pomortsi and the chasovennie (a name derived from a word meaning, chapel) represent the majority of bezpopovtsi (although the latter had priests as recently as the 19th century).

One group of bezpopovtsi stands alone; it is called, the ‘netovskoe’ denomination. Netovtsi have no churches, nor serve vespers or hours, this is why they are called ‘nyetovtsi.’ Netovtsi refer to themselves as ‘Spasovtsi,’ because, as they say, the rely only upon the Savior. They differ from the other old-believers in that they do not baptize those from the Russian Orthodox Church.

The Vyg Hermitage, famous for its literary activities, played an important role as a spiritual center for many old-believers. In it, the Denisov brothers, Andrey and Simeon thrived in the early 18th century. Here, the famous Pomor Answers were written. This book coherently outlines the main positions of old-believers. In the reign of Tsar Nicholas I, this great northern monastery was destroyed.

In 1799, some Moscow old-believer merchants, feeling the burden of persecution and taxation, appealed to Platon, the Metropolite of Moscow, asking permission to use priests from the new-rite church. Special conditions were set. Firstly, these so-called old-believers asked the reigning Synod to cancel the anathema pronounced on the old rite and to consecrate churches using old books. Secondly, all the priests aught be ordained and need serve according to the old rite. Additionally, the priests must not be forced to pray with those who make the Sign of the Cross with three finger i.e., with new rite adherents. Thus they tried to establish a society separate from both the groups. Metropolite Platon agreed to these demands but added his own conditions. He pronounced that this church could be tolerated only temporally — until its members leave their former “errors.” The Metropolite also stressed that his church will not change her opinion regarding the “inferiority” of old rites. This is why nobody from the mainstream church could join the edinovertsi, neither could one thereof receive communion there, unless on his deathbed. Metropolite Platon regarded these newly-arrived Christians with suspicion. On the one hand, he deemed it impossible to call them, dissenters, on the other hand, he could not accept them as fully Orthodox, so he called them, edinovertsi.

Only an insignificant portion of old-believers joined the edinovertsi, who began their existence in 1800. Old-believers avoided this move as a dangerous trap; and the hierarchy of the new-rite church did not trust this congregation. In their official reports, bishops named the edinovertsi, “semi-dissenters” and “schismatics.” The number of edinovertsi increased only during the reign of Nicholas I, when they received churches, chapels, monasteries and books confiscated from true old-believers. (This is part of the reason why the mainstream church was sometimes offensively styled, the treasury’s church.)

The edinovertsi felt the burden of their uncertain position: they used old books, had their own priests, but could but dream of having their own bishop. Often did they appeal to the Synod for permission to consecrate a bishop, but were ever unsuccessful. Only in 1918 did they succeed, partially and too late.

When the new-rite church lost her influence, under the Bolsheviks, and was no longer able to support the edinovertsi, many of them rejoined the old-believers, although some yielded to atheistic propaganda. Some edinovertsi tried to create their own hierarchy, but, unsuccessful, many joined the Belokrinitskaia hierarchy and the Beglopopovskaia. The number of edinover parishes steadily declined. Many were closed; yet others transferred to the new rite. In the 1980s the last edinovercheski bishop died, but some congregations remain.