100 thanks (Active member of the community)
Znamenniy chant 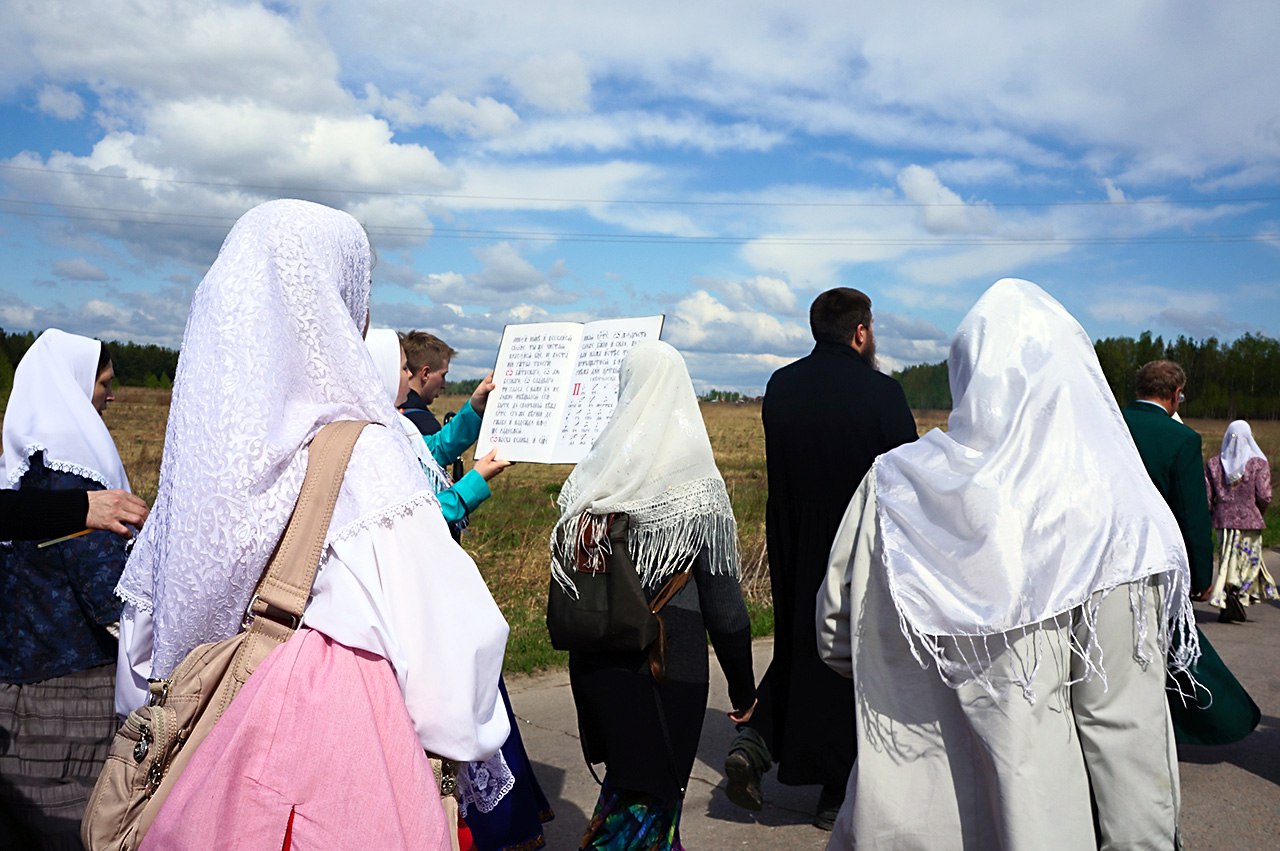 Hooks or znamena are the symbols used by Russia’s Church in place of notes for inscribing hymns. Znamena (or, standards) derive from the notations used in the early Byzantine (Roman) Empire. Each hook (or, kryuk) denotes a sequence of relative tonalities. In the 17th century, cinnabaric (red) ticks above the hooks came into use to denote the exact pitch level. Hooks are still used by old-believers, whereas the mainstream Russian Orthodox Church abandoned them in the 17th - 18th centuries.

The core principles of liturgical signing, which first appeared in late antiquity, were preserved, and further developed, in Russia. Initially based on the ancient Greek modes, if that is the right word, liturgical signing had distanced from secular music, acquiring features peculiar to Christian hymnology. The Christian Church, in the spirit of asceticism, refrained from using instrumental music, concentrating on glorifying God using the instrument created by Him i.e. the human voice. St. Clement of Alexandria called for the expelling from church the chromatic scale used by secular musicians in expressing moods. The scale of the znamenniy chant had developed out of the main modes of antiquity, evoking sentiments of austerity, grandeur and serenity.

Orthodox tradition differentiates singing and music, referencing the Sixth Ecumenical Council. This distinction concerns the different purposes of the two: music is destined to give aesthetical delight, whereas liturgical song serves to sublime one’s mind to God. Christian saints saw the need for hymnology and were very concerned for her development. Ignatius the God-bearer, of Antioch; Methodius, bishop of Patara; Ephraim the Syrian; Basil the Great, of Caesarea; John Chrysostom and many other ancient theologians left a rich legacy of liturgical compositions. Many of their compositions elaborated the liturgical hymns, defined and elucidated their goals.

Orthodoxy hymnology appeared for the efforts of great men of faith. In the middle of the 8th century, St. John of Damascus established the current system of eight modes, i.e. had tailored the whole corpus of church chant to the eight “voices,” or modes. Each such glās is characterized by a specific mood or melodic idiom, ranging from deep repentance to tenderness to triumphant exultation. Thus, the Sunday troparia, the stichs (sticheri) and the canons, authored through the centuries by different scribes, were collected and arranged by St. John. This collection is called, the Oktai.

John of Damascus, a chief alderman of the Damascus Caliph, was a many-faceted man, an encyclopaedist and a zealous believer. Having withdrawn from the caliph’s court, he took the monastic vows in the monastery of St. Sava and devoted his life to God. He is the author of the Easter Vigil, nearly 64 canons and countless sticheri; The Oktai was soon adopted by the eastern churches and is widely used throughout Orthodox Christendom to this day.

In ancient Russia, the liturgical chant was received along with Christianity, with the other recently translated service books. The Greek modes took root in Slavonic lands, assuming a genuine Russian melodiousness. Here, the church melodies became especially mellifluous. Because old-Russian devotional song developed along Byzantine models, the znamenniy chant was adopted as the standard (“standard” or “emblem” is the meaning of the word, znamye).

The znamennoe style of singing was employed in ancient Russia not only in churches but also in residences, as this culture of singing was becoing widespread. Hook manuscripts were used by every social class — from the grand dukes and boyars to the last bondsman in the state, as the chronicles testify.

A few words about the znamena, or hooks

Znamenniy chant is inscribed with markings, called, hooks. Hence the other name — kruykovoi, that is, hooked. Each hook represents a series of tonalities, indicating their duration and nature. Hooks come in hundreds of varieties, represented by a complex terminology that does not yield itself willingly to the tone-deaf translator. These “arrows,” “doves,” “commas” and “hitches,” along with the rubricated markings indicating the initial pitch, are transformed by the singer's voice into a captivating melody that stresses the words, for these are the focus and essence of the whole business, whereas the melody is secondary.

Apart from that of the the eight modes, or voices, there exist other notable styles of paean: the Demestvenniy, the Putevoi, the Irghiz, the Kievan and the Bulgarian chants — these are all types of znamennoe singing. A special notation had been invented for recording the Demestvenniy chant; its zmanena differ greatly from the common hooks. Apart from these noteworthy styles, there are numerous variants of the same songs that reflect local tradition. These are rarely recorded with znamena, but are passed down orally from one generation to the next.

In the old-Russian liturgical tradition, song is not polyphonic — the voices merge into a harmony characterized by depth and concord. The homophonous chant is an ancient and essential feature of church prayer, which eloquently expresses unity, humility and love. Nikon’s reforms of the second half of the 17th century endangered the existence of this mode of singing. Their outcome was the adoption of Italian styles by the official church. The modest yet noble sound of znamennoe singing can now be heard only among old-believers.

Persecutions of the old faith continued for almost three centuries, now waning, again renewed with new savageries. Old-believer monasteries and churches — spiritual centers and scriptoria — were frequently demolished; books were set afire. Old-believers were prohibited from establishing schools and academies. In order to preserve their faith and heritage, they had to act clandestinely, much like the early Christians in the catacombs. When some schools were destroyed, others appeared elsewhere, in order to ensure the transmission of knowledge and skills.

By the end of the 19th, early- 20th centuries, government pressure and that from the established church had subsided somewhat and centuries-old potential for free and public singing flowed forth vociferously. The famed Morozov Choir (established by A. I. Morozov, the business tycoon) conducted public performances in St. Petersburg and Moscow. The Fellowship of the Savior’s Holy Cross operated another famous choir, under the leadership of Jacob Bogatenko. Another famous school appeared in the Strelnikovo village near Kostroma, laying the foundation for the Strelnikov Choir. The preserved recordings of these choirs demonstrate the exceptional skill of the singers (astounding musical scholars the world over).

The heyday for free and open devotional singing was not destined to be long. The years of Soviet rule and anti-religious propaganda shewed widespread persecution once more. Churches were blasted and burned, millions of books and icons were destroyed, Christians were sat in detention camps. Those churches that managed to withstand were left bare and void of able-bodied devotees (as these were put to work building socialism). This was a great blow to the preservation of ancient liturgical hymns, the consequences of which can be observed even heretofore.

Nowadays, more and more people realize the importance of preserving this truly unique choral culture handed down from generation to generation by people for whom the service of God was their life’s work. With this very purpose in mind are choirs established, concerts held and books published. The znamenniy chant is increasingly studied by music experts and many ROC parishes are returning to it. But the Heavenly sounds of ancient song speak louder than aught, proclaiming the Truth of the ancient and authentic Orthodoxy, untouched by Nikon's reforms. The znamenniy chant, which took shape during the centuries of martyrdom, asceticism and theological studies, had been preserved for the ages for all Christendom. It is intended to uplift the soul striving for repentance and yearning for God, therefore cannot and must not be relegated to oblivion.